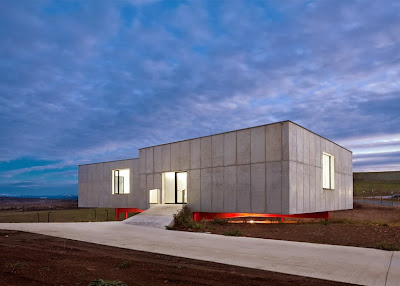 Taller Básico de Arquitectura used the red structures to create flat levels for the box-shaped labs, which sit on a gently sloping site at a technology park in Vitoria, close to Bilbao.

Two beams cross beneath each block so the columns sit under the middle of each external wall. Each wall features a single square window or doorway.

The square boxes sit at a slight angle to one another, almost touching but connected by a short bridge that's glazed on the sides and above.

The first block contains two small rooms and places to sit, while the second is a single open research space filled with work benches.

Black window frames stand out against the clinical white interior.


Here's some additional information from the architects:

The technologic Park of Vitoria colonises a little bit of nature. The quality of the site and its steepness make us question where to build. Two boxes made from air rise above the slope. The structure become architecture carries on its shoulders these boxes, showing a new plane.

We investigate new ways of entering new places. Our place appears on a new level, determined by a four-legged and colourful structure. Two hollow boxes of concrete inhabit this new place on the structure. The whole complex in a permanent flight reveals a new gravity.

The metallic structure that raises the boxes in the air is a quadruped structure. Its two horizontal elements form a cross inscribed in the square floor of the boxes. The sides of these floors measure twelve and thirteen meters respectively. The horizontal beams where the boxes rest avoid any interlocking.

Consequently, the structure is visible in its entirety. The ends of the beams join vertical elements, which become the legs of this quadruped anatomy. Legs are as wide as beams, managing a continuity that makes all the pieces be understood as a unique element. Different lengths of the legs let the slope remain unaltered.

The structure of the box

The box is thought as a second structure that replaces walls with beams and roofs with double slabs. The vertical faces of the box are beams as high as the box. These wall-beams have only one hole, defined by the maximum dimensions that let the beams work properly. Outside, the concrete structure is visible on all faces of the box.

Inside, plasterboards cover the structure. The window frame, drawn as a single line, stays hidden between both sheets. The gap between sheets, both in walls and slabs, contains all building systems, as plumbing, electricity, voice and data. This net of systems solves the flexibility needed by the laboratory for its continuous transformation. 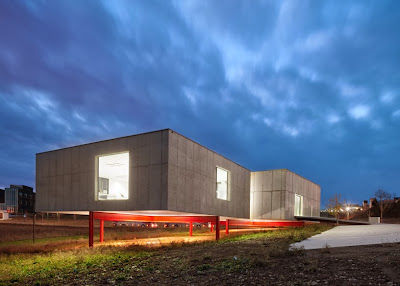 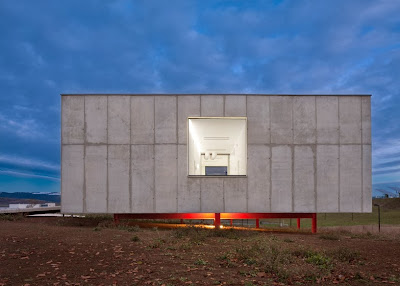 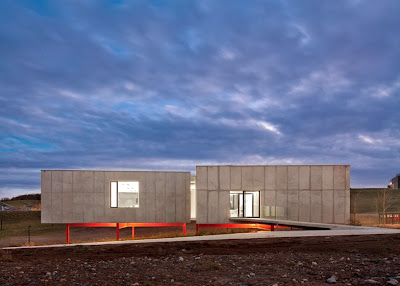 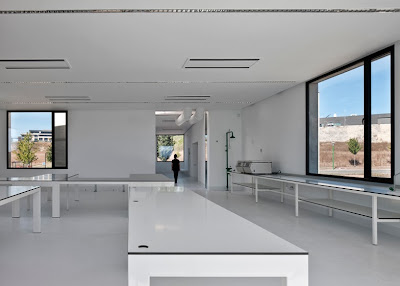 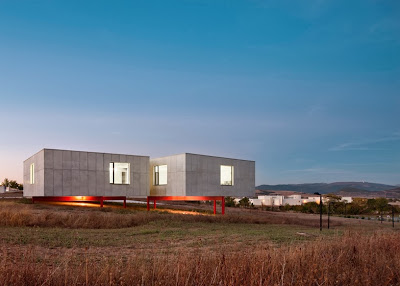 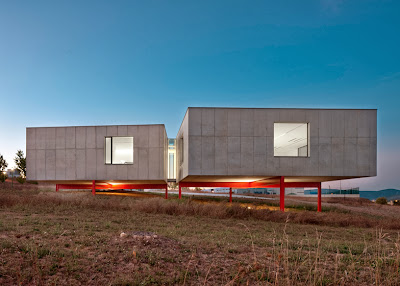 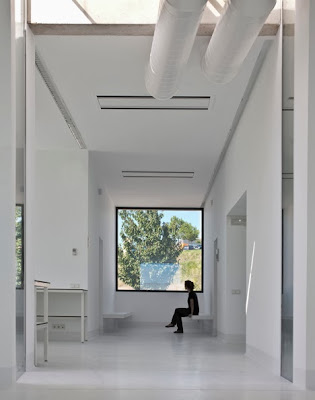 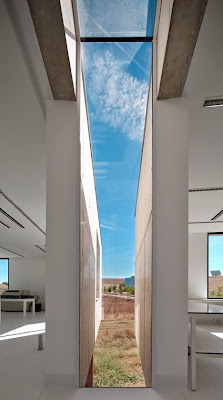