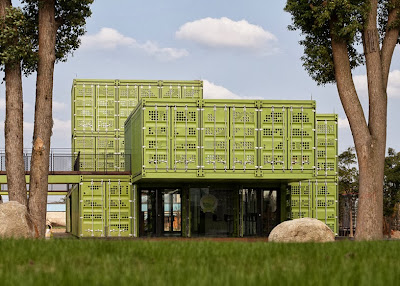 Berlin and Shanghai-based studio Playze stacked up perforated shipping containers to create offices for an organic farm in Shanghai, China (+ slideshow).
Tony’s Farm, the biggest organic fruit and vegetable farm in Shanghai, asked Playze to develop a main reception, lobby and VIP area as well as offices alongside the existing factory.

The architects cut open one side of the factory – the white building seen in the photographs – and filled one end of the space with shipping containers, inside which are labs and offices.

Containers were chosen for their strength as well as their sustainability, being "a metaphor for recycled space", as the architects explained. Local bamboo was also used for indoor and outdoor flooring.

The entrance, located underneath three cantilevered containers, leads through to a triple-height lobby created by stacking up containers and removing the walls between them.

Visitors then enter an inner courtyard, which references traditional Chinese courtyards and is partly covered by the terrace above.

Bridges on the upper floor connect the offices in the outer cluster of containers to those inside the factory.

There are also plans to build hotel rooms across the farm to host eco-tourists and guests. "It was part of the design to imagine the connection between this core building and the hotel rooms that will be built," says architect Didier Callot. "The client is still working on this hotel project."

Playze was founded in 2007 and is based in both Berlin and Shanghai, aiming to bring German design standards to China's large-scale, fast-paced projects as well as working on smaller-scale urban projects in Europe, according to Callot.

Tony’s Farm is the biggest organic food farm in Shanghai, which produces OFDC certified (member of IFOAM) vegetables and fruits. But Tony's Farm is meant to be more than just a place for vegetable production. The vision is to integrate the consumer and therefore promote a natural lifestyle.

To link the activities of the working people with the visitors of the farm, playze developed a building complex, which combines the main reception, a lobby, (working also for the future hotel rooms) and a vip area, with the new offices and an existing warehouse, where the fruits and vegetables are being packed.

The building provides transparency within the manufacturing process. Thus it supports the vision of integrating the visitor and helps to reinforce the consumer confidence in the products of the farm. At the same time the building design is driven by the concept of sustainability, combined with its iconic qualities, it communicates and promotes the core concept of Tony's Farm.

The building has been designed as a continuous spatial sequence in order to physically and visually connect various interior and exterior programs. The whole structure demands an exploration by the visitors. It is not obvious how the spatial sequence will develop while crossing the building and the site. A system of terraces functions not only as transitory space but also as extension of the interior work and leisure areas. Outdoor meetings and other activities support the aspiration of the client to literally work surrounded by nature and same time reduce the use of conditioned space.

Throughout the project the immediate spatial relationship between the building and the environment is meant to create a virtual dialogue between the industrial aspects of food production and the surrounding farmland. The massing strategy supports this ambiguity by creating various types of visual relations.
The systemic nature of the containers is countered with the adaptation to the specific situations, like entrance, courtyard, office wing, terraces, etc. The different orientations towards the landscape of the farm, the functional requirements and the spatial sequence are defining each situation of the layout in a specific way, although the spatial framework is the container with its standardized dimensions.

The cubing of the containers follows spatial and climatic demands. The cantilevering gesture marks the main entrance of the site. This is where the visitors enter the structure and find the reception desk. After the lobby, which is accentuated by a 3 stories high volume, they step out to an inner courtyard, where they are picked up by electric cars to be brought to their hotel rooms, distributed throughout the farm.

The second level allows a connection to the office wing of the building via 2 bridges. This part of the building complex is covered by the existing warehouse. The east facade has been sliced, so that the new container offices could find shelter underneath the existing roof and form an new inner facade towards the production hall.

Since the climatic exigence asked for impermeability and insulation, numerous specific details had to be developed to maintain the stringent appearance of the containers. The elaborate details, for example the still visible steel beams of the containers in the interior, stand in contrast to the rather rough and crude tectonic details of the freight container. Further, the modular system was challenged by the individual joints, resulting from the irregular distribution of the containers.

The structural logic of the container is the framed box, which can be opened or left closed towards the 6 orientations. These characteristics were amplified in different spatial situations, integrated within the whole structure. At the entrance situation for instance, the additional supporting structure is reduced to a minimum to underline the ''loating; moment of the containers. The 3-storeys-high vertical space is open to 3 sides to dissolve the box. In the courtyard, the terraces form a roof to the underneath and quote the chinese courtyard typology, whereas the office part is developed in the style of a slab and pillar constellation.

In order to cope with the high aspirations of the client regarding the protection of the environment, several strategies have been used to reduce the energy consumption of the building. The entire structure is well insulated, even though the containers appear in its raw form. The original container doors have been perforated and serve as external shading blinds at the sun exposed facades to minimize solar heat gain. A geothermal heat pump delivers energy for the air conditioning and floor heating systems. Controlled ventilation helps to optimize air exchange rates and therefore to minimize the energy loss through uncontrolled aeration. The use of LED lighting reduces the general electricity consumption.

Another ambition of the project is to reduce the energy hidden in construction materials, the so called grey energy. Therefore recycled, ecologically sustainable, fast growing or at least recyclable materials have been used. The re-use of freight containers seemed adequate, first for its inherent structural autarky and second for being a common metaphor for „recycled space“. Further, the minimal weight of the container structure allowed to re-use the existing foundation plate. The use of local bamboo products for indoor and outdoor flooring, as well as all the built-in furniture additionally supports the ambition of constructing a truly sustainable building. 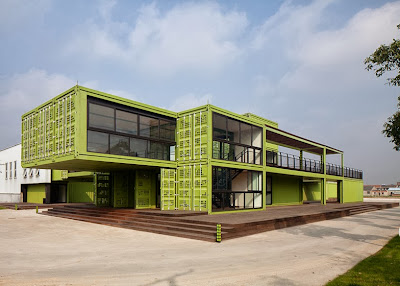 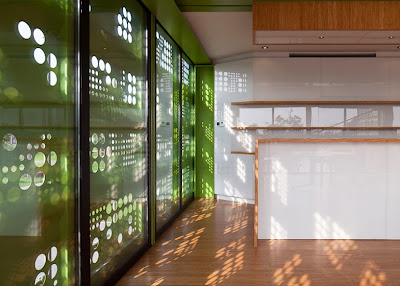 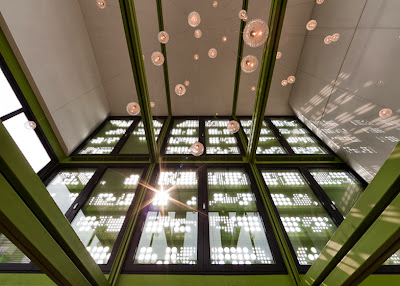 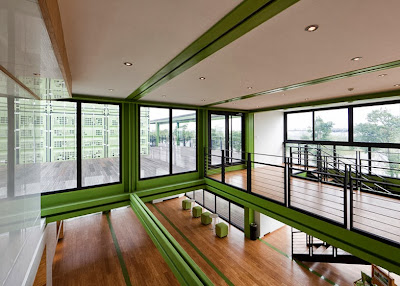 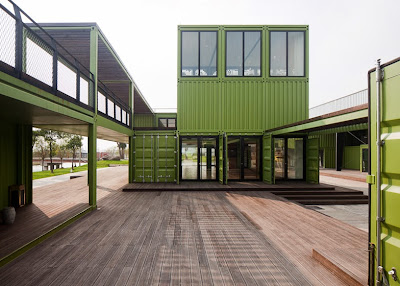 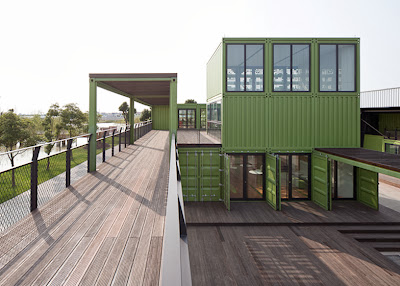 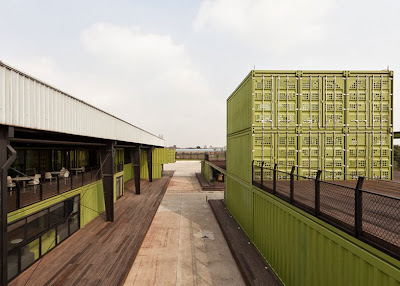 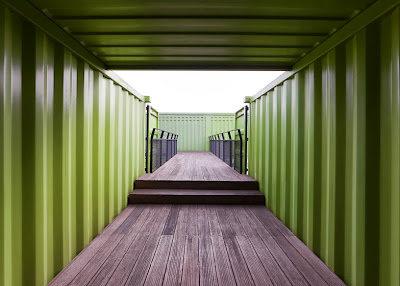 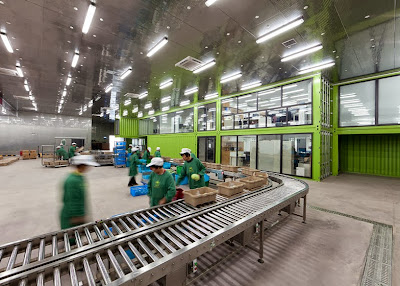 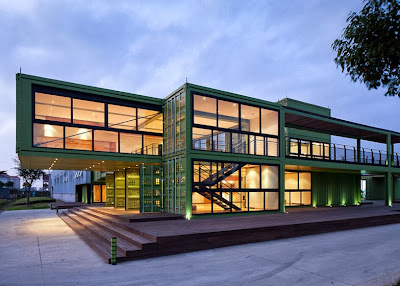 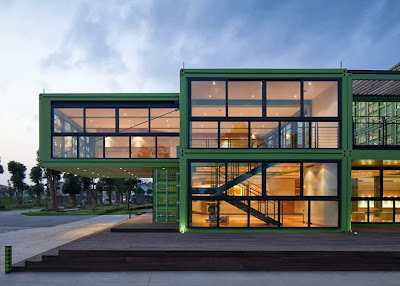 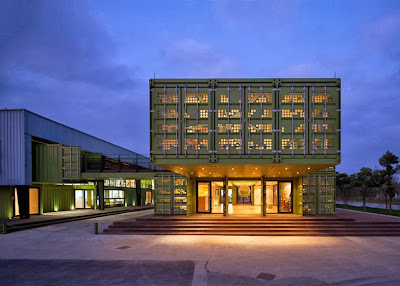 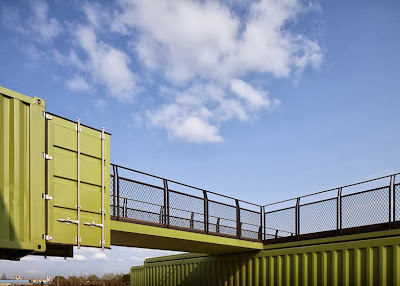