Completed in the year 2010, the Station is among the world’s largest train stations, roughly equal to three times the size of London’s Kings Cross Station. In addition to its train services, it will be a significant interchange to other modes of transport, including taxi, car, metro and bus. By 2030, passenger flow will reach over 300,000 daily. In order to accommodate the large volume of passenger movements, a clear vertical organization strategy has been adopted. Metro lines and concourse comprise two basement levels; all train arrivals are at ground level connecting directly to other transport modes including the metro below; departures are from an elevated concourse with spacious waiting rooms and clear views to the 28 platform edges below. Located in-between the departure concourse level and the arrival level are the 28 elevated viaduct platforms for high-speed trains.

Atrium spaces are located at the main drop-off entrances at either end of the station. These atriums unite the elevated departure concourse platforms and waiting hall, with the ground level arrivals hall. The departures hall features food and beverage outlets and spacious waiting rooms for greater passenger comfort. Bisecting the main central roof is a 348m long central skylight spine that is widest near the entrances and narrows towards the centre, providing an order to the departure concourse and refining the circulation route.

The skylight is constructed of a diagonal grid of structural steel in a barrel vault form and clad in ETFE air cushions which provide maximum natural daylight to the station interior whilst minimising heat gain. The roof forms are barrel vaults reminiscent of traditional Victorian railway halls with a standing seam roof that is angled at 45 degrees to evoke the natural structural form of leaves. Skylights are positioned between the railway tracks so that natural light can also filter down to the ground level arrival hall. Curved at each end, the roof protects the passengers on the platforms from the elements.

Another driving force behind TFP’s open-plan station arrangement was the desire to assist passenger orientation in the station planning. The use of 68-metre spans create column-free waiting rooms on the elevated concourse while passengers on other levels have good visual connection with escalators, lifts, entrances and similar other facilities.

The design’s primary themes are the connection of Guangzhou and Foshan to either side of the station and the opportunity afforded by the green-field site to make this essentially a “garden” station which will act as a catalyst for the generation of an entirely new urban area. The masterplan addresses both districts with the creation of two landscaped urban plazas constituting the entrances to the station. The geometry of the entrance canopies continues from one side to the other via a light filled central spine. This spine is the main concourse at departure level and comprises a series of landscaped areas with waiting halls to either side. Ensuring the station acts as a unifying element in the new city, the tracks are elevated allowing free pedestrian access via the landscaped arrival concourse.

The form is an expression of the station’s functional programme. The spine signifies the connection between the plazas; the central roof connecting the spine defines the extent of climatic enclosure at the upper level. The combination of skylight and curved form provide positive definition and expression of the circulation space and give the passenger a very clear sense of orientation.

The design of Guangzhou South Railway Station strikes a relaxed balance between function and formal expression. This is achieved through the concise articulation of meticulously designed structural elements, which simultaneously endows the station with a unique identity. Not only will the station generate a new urban area, it will also be of significant importance in promoting the rapid development of a regional economy. 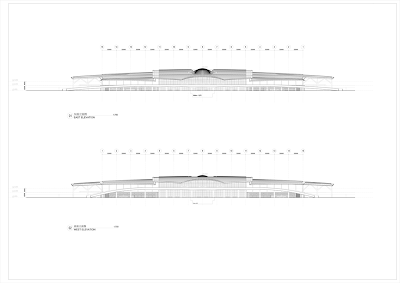 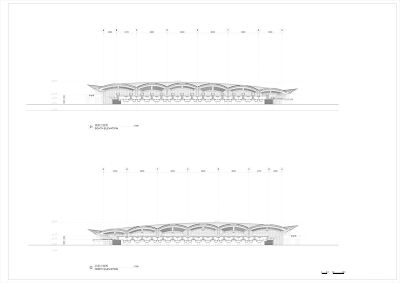