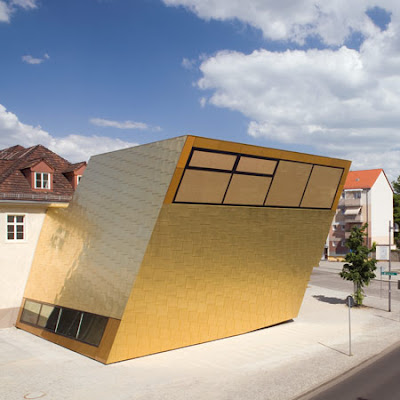 The project involved the conversion of a former railway station into a public library and includes an extension to the existing building that houses the children’s library. 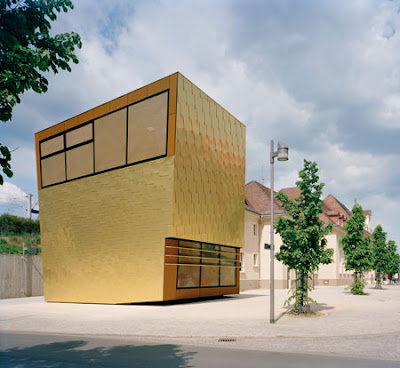 The inclined walls of this annex are clad in shingles made of a copper-aluminium alloy. 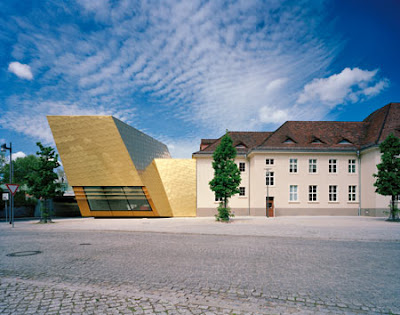 As part of extensive renovations and the modernisation of a former railway station in the German town of Luckenwalde in the state of Brandenburg – about 50 km to the south of Berlin –, an annex was incorporated into the existing buildings. The project has set a striking example, not only from a town planning point of view. Behind the glittering TECU® Gold façade are the children’s and youths’ sections of the buildings that are now used as the town library. In view of the problems in the built-up surroundings of the complex, the shape and design of the façade challenges people to consider the potential town development has for change – and, above all, they offer the younger generation an inviting, lively and modern town library. 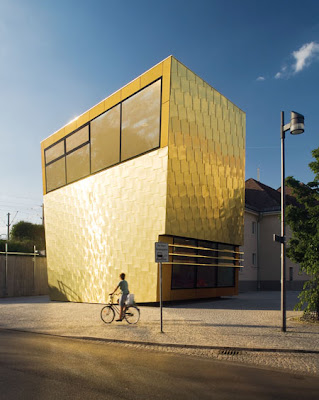 Luckenwalde is just 30 minutes by train from the centre of Berlin. This close connection to the capital city through the Berlin-Leipzig-Dresden railway line was a result of the dynamic economic developments taking place in the region at the end of the 19th and start of the 20th centuries. Back then, many companies, mainly in the textile industry, chose to settle in Luckenwalde. A well-known architectural heritage of this glorious past is the hat factory built by Erich Mendelsohn between 1921 and 1923. 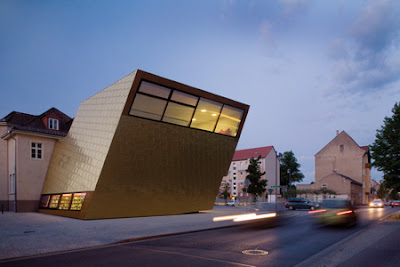 Numerous innovative residential building projects also contributed to the town’s fame in the Golden Twenties. These days, Luckenwalde is just one of the many small towns in East Germany’s numerous weak structural regions that have had to combat the known problems of a declining population coupled with growing unemployment and a lack of perspective since the former GDR was reunited with the Federal Republic of Germany. Accordingly, the townscape is characterised by numerous projects for the demolition of empty buildings. 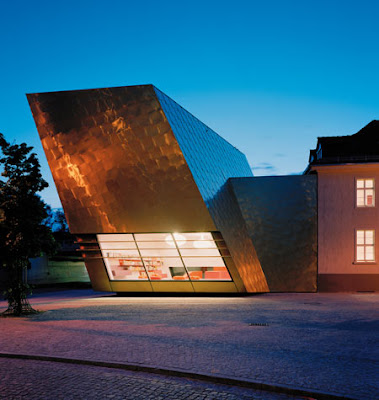 Difficult conditions for new impulses – at least they would have been if Luckenwalde had not been included in the European Union’s URBAN sponsorship programme – the only small German town to participate. The resources that were made available allowed the capable local government, in collaboration with powerful political decision-makers, to implement many projects in the town. The conversion of the heritage-protected railway building into the town library was the largest of these URBAN projects. The popularity of this project also stimulated the flow of further development funds from the state and national governments. 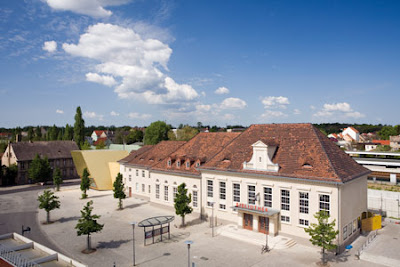 Before conversion work began, the severe deterioration caused by the building standing empty for so long – known from many similar situations – had made its mark on the local environment. In other words, from a town planning perspective, the aim was not only to rescue a heritage-protected building, but also to reinvigorate a central public location in the town. Consequently, a decision was made to move the town library, which was located in a cramped, rather unattractive building, into the former railway station. 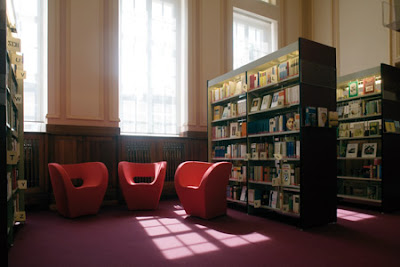 The renovation of the building and conversion to the town library was carried out by the architect team ARGE WFF in Berlin, who won the competition. The new annex containing the children’s and youths’ library created a self-confident landmark, like a logical conclusion to the successful renovation work that had gone before in the entire group of buildings. The structural shell, which is tilted on two axes and clad completely with glimmering TECU® Gold Shingles, creates a new spatial situation on the station square with an impressive presence that can be seen from the neighbouring Käthe-Kollwitz-Strasse that connects the station with the town centre. The annex is a conspicuous indication of the new function of the former railway station: it stands in the town’s public area like an over-dimensioned showcase.

According to the architects’ plans, right from the outset the annex was to be realised as an abstract sculpture. The façade was to be a homogeneous surface that would support this abstraction and create an aesthetic relationship to the façade of the renovated old building. The TECU® Gold Shingles, made of a copper-aluminium alloy produced by KME, proved to be the ideal solution for the complete cladding. In spite of the marked contrast to the old building, the sensuous value of the material is a perfect complement to its solidity. A very important aspect of the façade material – besides its durability and economy – is its ability to create different appearances depending on the light and the weather. Because of the reflecting surface and the varying inclinations of the building, completely different atmospheres and moods are created at different times of the day. The continuous weathering of the material has a similar effect: as time passes the surfaces will change in various ways depending on the angle; in other words, the building will develop a very individual and lively façade.

One important aim of the structure of the metal façade was to cover the inclined building with a continuous, homogeneous and sharp edged cladding without seeming to give the cubic content any particular order. The scale-like shingle cladding wraps consistently around the corners of the building, changing the arrangement of its angles on every side of the façade without maintaining one single direction due to the geometry of the tilted surfaces. The glass openings follow the same logic: they are not planned as openings, but rather as a continuation of the cladding. Flush to the outside with the shingle cladding, they sit on the surface, adjoining the edges of the building. The bearing construction is concealed by golden ESG panes on granulated glass sheets, while some of the insulation glazing absorbs the golden colour with an internal gold-coloured metal mesh.
An important requirement for appropriate use of the new library was constructional independence that did not exist previously due to the railway building’s connection with the railway embankment. The demolition of the connecting annexes created a new runway to the railway platforms and, consequently, an autonomous position for the library. The rooms that were renovated in keeping with heritage-protection requirements are now used as a traditional library; the former station concourse is now the central area of the library. Racks contain the latest magazines, there are subject-related book tables and a cafe bar – references to the original use of the concourse, which can also seat up to 100 people for events whenever required. The core areas of the library are matched up to the previous ambience of the building’s waiting rooms: the former first class waiting room with its tasteful interior now houses the fiction section with spacious reading areas, while the talking books can be found in the so-called Kaisersalon or Emperor’s Lounge. In the third and fourth class waiting rooms a large staircase leads to a recessed gallery, creating a link to the books upstairs.
The annex for children’s and young people’s books creates special interior spaces that break away from the orthogonal structural principle of the railway building - just like the younger generation breaks away from the cosiness of the home. The children’s library on the ground floor offers open reading and play areas, the youth library upstairs, however, is more of an introverted place. With a design reminiscent of a modern lounge, it consciously distances itself from the rest of the library’s spatial structure and invites visitors to use the available media individually. Young people need have no fear that they will disturb other more peaceful areas of the library. Accordingly, the youth library on the top floor also joins the audio-visual media area: music, films and CD ROMs can be viewed and listened to here or can be borrowed to take home.
Since the festive opening in July 2008, the vital function that the new library has for Luckenwalde has become increasingly evident. The number of users and the amount of media that are borrowed have both increased continuously; the available computer terminals are occupied almost constantly. An association of friends and sponsors supports the library’s work: groups of pupils work voluntarily in the library after school. Contrary to the scepticism expressed in advance of the project, the facility is now widely accepted. Because of this enormous success, Luckenwalde now serves as a model project in the URBAN town development sponsorship programme in Brussels.